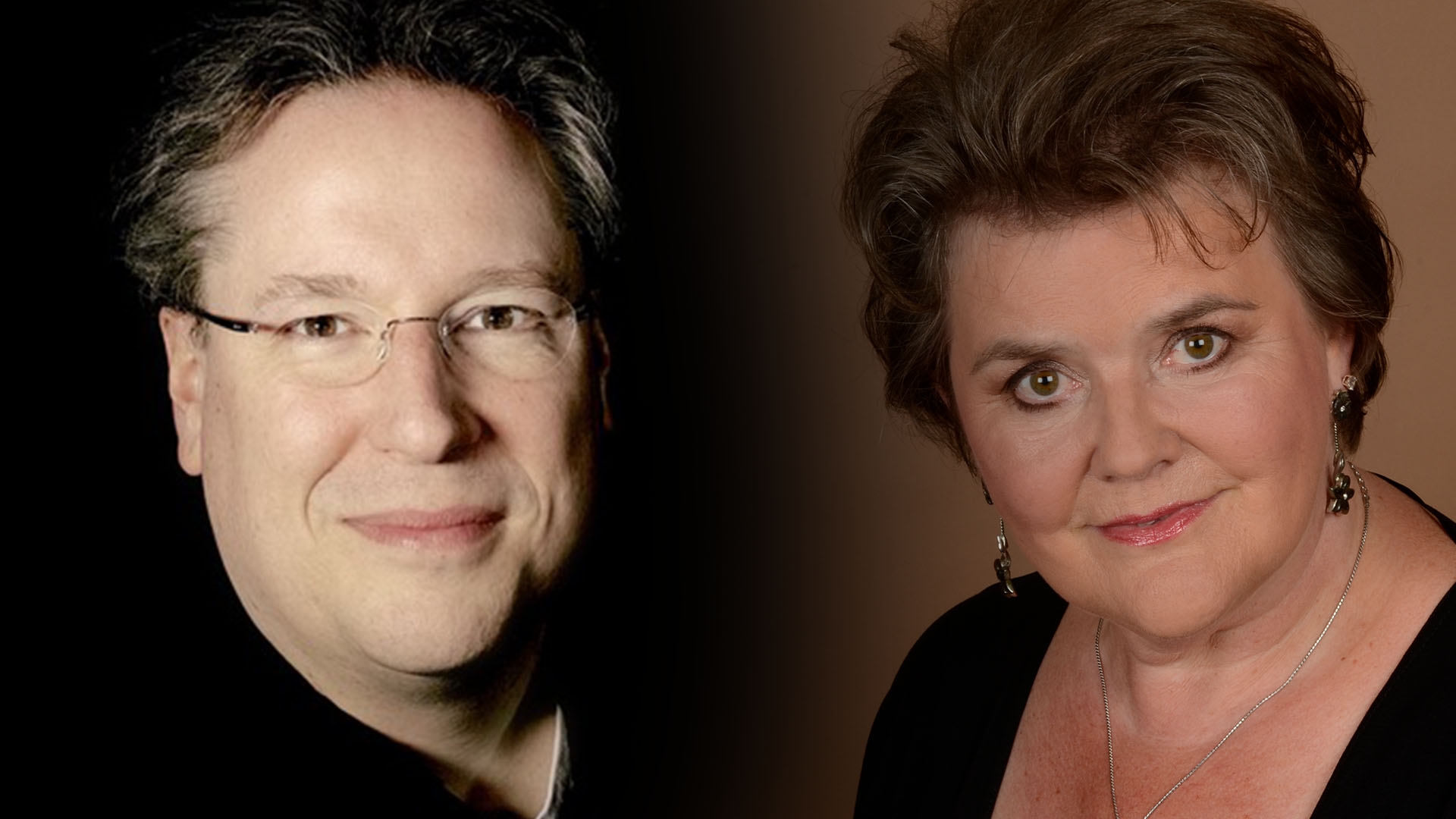 Charlotte Margiono, soprano
The Past
It all started at the Conservatory of Arnhem, where I was more or less discovered by Aafje Heynis, with whom I I completed my studies as a Performing Artist in 1982. Later, after two years at the Opera Studio in Amsterdam, I left for Berlin where I continued to learn under the passionate guidance of director Harry Kupfer.
Back in the Netherlands, I met my manager and good friend Pieter Alferink, who, from that moment on, took care of all of my artistic engagements – and still does to this day. The first engagement I obtained through him was a series of concerts, in 1986, in Rotterdam with James Conlon, where I sang as a soloist in Mahler’s Symphony #2, together with contralto Jard van Nes.
A variety of different roles in various international opera houses quickly followed. Oftentimes people ask me what the highlights in my career have been for me. A short question with a long answer! Berlin, where I sang Mimì in La Bohème under Rolf Ruiter and Harry Kupfer in 1984. Amsterdam, where I performed Fiordiligi in Così Fan Tutte under the baton Nikolais Harnoncourt, directed by Jürgen Flimm. London, where I recorded Beethoven’s concert aria “Ah, perfido!” with Sir John Eliot Gardiner in 1991, and Salzburg that same year: Vitellia in La Clemenza di Tito with Sir Colin Davies and director Peter Brenner. In 1993 I sang the soprano solo in Haydn’s Die Schöpfung with Frans Brüggen. In 1994 I performed Desdemona in Verdi’s Otello with Antonio Pappano, Donna Elvira (Don Giovanni) in Parma, conducted by Sir John Eliot Gardiner and directed by Lorenzo Mariani, and the Contessa in Mozart’s Le Nozze di Figaro in Tokyo with Claudio Abbado and Jonathan Miller. In London, 1995, I performed Strauss’ Vier Letzte Lieder with Bernard Haitink. A little later came a stretch of especially fond memories in my home country: the title role in Dvorak’s Rusalka with Leos Svarovsky in Utrecht and a lied recital in Rotterdam with conductor Ed Spanjaard (1998), Marguerite in Berlioz’ La Damnation de Faust with Bernard Haitink (1999). In 2001 I sang in Beethoven’s Fidelio as Leonore with Simon Rattle, conducted by Deborah Warner. After that came Elsa in Wagner’s Lohengrin with Edo de Waart and Pierre Audi (2002), Szymanowsky’s Stabat Mater with Jaap van Zweden and Wagner’s Die Walküre as Sieglinde with Hartmut Hänchen and Pierre Audi (2004), all in Amsterdam. Then in 2005 came Der Freischütz in New York City, where I sang Agatha under Eve Queler. In 2011 Simone Young and I performed a selection of Alma Mahler songs in Hamburg, Germany
Another immensely important part of my career, is my musical partner and the other half of my lied duo: Peter Nilsson, with whom I have done many beautiful and exciting recitals.
The CD recording and concerts in collaboration with pianist and composer Frans Ehlhart – singing his own compositions with texts by Ingrid Jonker – is also a highlight in my musical life.

The Present
Those who know me, know that I have always had the innate desire to teach, and I have indeed been doing so for quite a while. From May 2008 until June 2015 I was a main subject teacher at the classical voice department of the HKU Utrecht Conservatory. For the past ten years teaching has been a very important part of my life. I teach privately in my studio, and guide a number of young singers, all working at different levels as singers and performing artists. For me, this work is equally fulfilling as singing myself, only in a completely different way. The stage now plays a small but joyous part in my life, as a role here and there, a recital, or a concert with an orchestra – but passing on the craft and artistry of music and singing is now my main passion.

Born in Chicago, Peter Nilsson attended the University of Illinois, where he studied accompanying under John Wustman and voice under Dodi Protero and Mark Elyn. Peter Nilsson began as repetiteur with the Illinois Opera Center and Bowen Park Opera, and later worked at the Lyric Opera Center for Young American Artists and as accompanist for the Chicago Symphony Chorus, where he worked under Daniel Barenboim, Pierre Boulez, James Conlon, James Levine, Leonard Slatkin and Sir Georg Solti. As repetiteur for the Chicago Symphony Orchestra he worked with, among others, Dale Duesing, Susan Graham, Susan Dunn, Marquita Lister, Anthony Rolfe Johnson, John Tomlinson, and Tatiana Troyanos.

In 1992 Peter Nilsson moved to Holland, where he is Head of Musical Studies at the Dutch National Opera Academy (Den Haag/Amsterdam) and is a regular guest with the Broadcast Choir and at the Netherlands Opera, where he has worked closely with such conductors as Yves Abel, Marc Albrecht, Daniele Callegari, Paolo Carignani, Riccardo Frizza, Hartmut Haenchen, Ingo Metzmacher, Yannick Nézet-Séguin, Julian Reynolds Carlo Rizzi, en Mark Wigglesworth. Peter Nilsson is also active as accompanist for vocal master-classes, having participated in classes from, among others, Roberta Alexander, Elly Ameling, Diane Forlano, Hartmut Haenchen, Jard van Nes, Anthony Rolfe Johnson, Charlotte Margiono, Nelly Miricioiu, Barbara Pearson, and both series of Masterclasses given by Dame Joan Sutherland and Richard Bonynge at the Britten-Pears School in Aldeburgh. He joined the staff of the Mezzano Festival in 2015 and that of the Indemini Festival in 2017.

In Chicago he made regular appearances in the Dame Myra Hess recital series. He has appeared in the UK (St.John’s Smith Square, London among other venues), Belgium, Germany, and in the Netherlands, where he performs regularly with Charlotte Margiono. He was the pianist in Opera C&F’s highly-praised productions of Janacek’s Diary of one who vanished, and Phaedra & Cleopatra: 2 vrouwen.

He has appeared in all of the Netherlands’ major halls: both the Kleine Zaal and the Grote Zaal of Amsterdam’s Concertgebouw, Muziekcentrum Vredenburg in Utrecht, and the Doelen in Rotterdam, all with Charlotte Margiono. They were also to be heard together in the series Great Singers in Amsterdam’s Muziekgebouw aan het IJ. These two artists, together with violist Esther van Stralen, were guests of the first Festival Classique in Den Haag in 2007. In Amsterdam’s Concertgebouw he was heard with Alejandro Marco-Buhrmester in the Grote Zaal, and in the Kleine Zaal with Simone Riksman and Jean-François Lapointe, among others. He appeared with Olga Peretyatko in the Muziektheater of Amsterdam, and subsequently at the Edison Classics Gala. Firther recitals abroad include programs with Maria Riccarda Wesseling (Venice, Leipzig Gewandhaus, Zürich Tonhalle) and Julia Westendorp (Davos and Lucerne Festivals).

Mezzosoprano Maria Fiselier and Peter Nilsson released an album of English songs by Ivor Gurney, Herbert Howells, and Benjamin Britten as part of the launch of the 7 Mountains Records label. Peter Nilsson returned to 7 Mountains Records for an album of Respighi, Korngold and Strauss with soprano Jeannette van Schaik; future plans include a cd of German song with soprano Dorothea Herbert.